A graduate of Mankato State University (now known as Minnesota State University, Mankato), Eric Peterson received a Bachelor of Fine Arts degree, specializing in painting ,a secondary specialization in jewelry design, and a particular fondness for fiber design. Having worked in other media, Eric's has always found his greatest fulfillment working with acrylic on canvas (as is evident in his gallery, other surfaces apparently work as well) in sizes ranging from single pieces measuring two feet by four feet, on up to diptychs covering an eight by six foot area.

In the works of Eric Peterson, design comes from within. The title evolves in the process. Meaning is left to the viewer. His colorful impressionism evokes different responses from everyone, leaving the viewers free to see what they want and believe. Eric leaves it at that. No explanations. 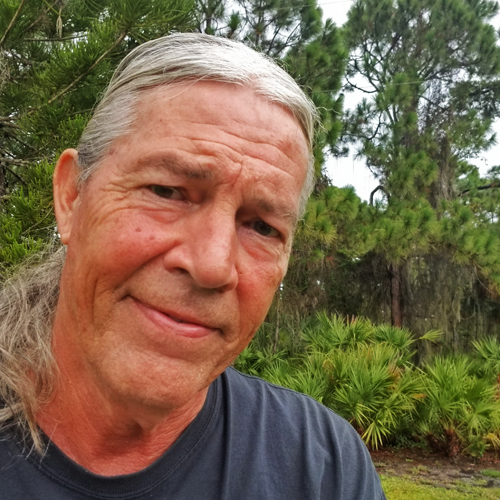 Other outlets of his artistic nature continue to surface in places like bathroom tile, interior remodeling and paver patios, just to name a few. Over the past decade or so, Eric has been working more in the digital arts and website design, building websites for numerous Twin City area businesses and clients. Creating unique and colorful web presence, Eric views the websites he creates as works of art as well.

As is the case with many artists, out of necessity, Eric found other ways to make a living. After graduating, he became a chef, then a manager and a district manager with Winchell's Donut Houses, finally owning his own bakeries. During the first Gulf War, he enlisted in the Army, learned the Russian language at the Presidio in Monterey, becoming a Russian linguist/Interrogator. Having discovered the art of persuasion, he tried his hand at car sales after leaving the Army, ending up as an Internet manager with an Acura Subaru dealer in the Twin Cities. This was the time that he started working with the digital arts, and began building websites. Creating whimsical uncluttered sites, that are in themselves, works of art.

Whether in the culinary arts, the language arts, or the more traditional arts, Eric believes they all have their place in life. In whatever you do, bring with you pride, some creativity, and passion. Life is art. Art is ubiquitous.

To add a little more to Eric's diverse portfolio of experience...  Eric served 3 terms as the mayor of the City of Wyoming, MN from 2010 through 2016.

In 2012, Eric helped found the Wyoming Area Creative Arts Community, establishing the Hallberg Center for the Arts, and enriching the lives of artists and residents in the arts.  Visit http://WyomingCreativeArts.org

Today, Eric lives with his wife Karla in Englewood, Florida.  Enjoying the sun, but still helping people with websites and continuing to help out the Wyoming Area Creative Arts Community back in Wyoming, MN.